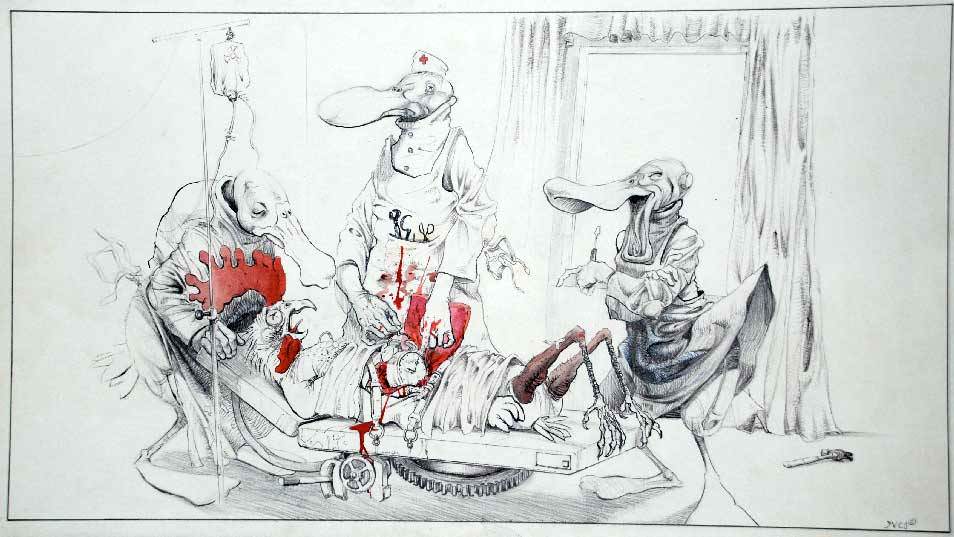 This is a very old drawing from Saint Luc Liège Illustration course, I believe in 1997. Around the time I began this drawing, I collided with painter, Jacques Capellmann, who was also studying, for a lack of a better word, at Saint Luc back then, while vaguely playing soccer in the Liège’s Botanic garden and broke my left wrist. The fracture was quite bad and required surgery. In the end, this rather unfortunate event turned out to be good: I suddenly had to learn to draw with the right hand to deliver school assignments. If you pay close attention you can see that the drawing lines are really shaky at places, and become gradually more controlled. It’s surprising how fast you can learn new skills when you are forced to do so. After about two weeks, I was able to draw with the right hand — wouldn’t go as far as saying I became completely ambidextrous by that time, but the lines were decent enough, whereas I could barely write my surname with the right hand before the incident. Even better,the new hand kept a trembling quality that my regular left hand cannot produce. Whenever it would add up to an Illustration, I could switch to this new drawing mode.